2.NO.1-2A: The Requirements of Flight Recorders for General Aviation and Supplemental Operations

ICAO Annex 6 regulations on installation of flight recorders depend on aircraft category (fixed-wing or helicopter), operation type (commercial air transport or general aviation), date the type certificate was issued, maximum take-off weight (MTOW), and propulsion type to distinguish the needs to install flight recorders and the specifications. However, the aircraft may be exempted from requirements if the MTOW of the aircraft does not reach the weight threshold, the manufacturer does not provide any technical service for modification, or the operators can not obtain STCs issued by Taiwan CAA, FAA, EASA or civil aviation authority from the original design country for technical modifications.

Public and military aircrafts which are not governed by civil aviation regulations do not have relevant legal sources for the installation of flight recorders. However, the newly acquired public helicopters (UH-60M) and second-generation fighters (F-16/M-2000/IDF) are equipped with military flight recorders. 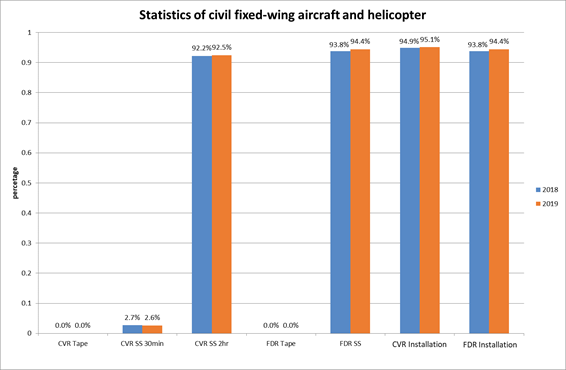 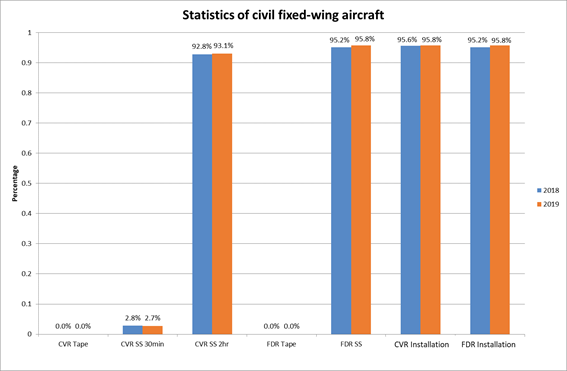 3.2 Findings from statistics related to civil helicopters and balloons installed with portable GPS:

3.3 Findings from statistics related to civil helicopters and public aircraft installed with  LWR:

3.5 Findings from statistics related to public aircraft installed with flight recorder and:

As per “Aircraft Flight Operation Regulation - Article 9”, by Taiwan CAA:

From 1 January 2009, an operator shall establish and implement a safety management system acceptable to the CAA which, as a minimum:”.

The safety management system as set out in the preceding paragraph shall clearly define lines of safety accountability throughout the operator’s organization, including a direct accountability for safety on the management level, and comply with attachment 1.

An operator of an aircraft of a maximum certificated take-off mass in excess of 27,000 kg shall establish and maintain a flight data analysis programme as part of the safety management system in paragraph 1 above.

The flight data analysis programme as set out in the preceding paragraph shall be non-punitive and contain adequate safeguards to protect the source(s) of the data.

Seven national-registered operators have set up monitoring systems for daily operation and total fleet size is 222 aircraft. There are 194 aircraft equipped with QAR, 20 aircraft (including A350 and B787) use WQAR instead of QAR, the remaining 8 aircraft have been adopted their FDR data to FOQA purpose. Statistics of FOQA systems using by national-registered operators are listed as table 1.

One of the goals the TTSB Investigation Laboratory trying to pursue is to reach 100% capability of flight recorder readout for national-registered civil and public aircraft. To accomplish this, the laboratory carries out national-registered aircraft flight recorder installation survey every year. In overall, tape-based CVR and FDR were completely phased out since 2015. With the recommendation regarding promotes use of 120 minutes CVR issued to the CAA, there were positive responses in this survey. The proportion of 120 minutes CVR installation continually increases from 92.8 % (2018) to 93.1 % (2019). The 30 days ULB “Underwater Locator Beacons” attached to CVR and FDR are replaced by 90 days ULB due to the new ICAO recommendations and European regulation. The proportion of installation  of 90 days ULB on the surveyed recorders are 93.5% and 94.6%.

By 20th Aug. 2019, the readout capabilities at TTSB LAB for the surveyed CVR, FDR, portable GPS and LWR both in civil and public aircraft have all reached 100%.